Kashmir Journal: a few days in the Lolab valley 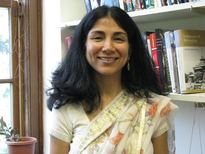 In an occasional series for KashmirConnected, the eminent historian of Kashmir Chitralekha Zutshi writes about her experiences across the Valley and the manner in which the past moulds Kashmir's present
﻿It was raining so heavily when we crossed the signpost announcing our entry into the Lolab Valley that the sign “Welcome to Wadi-i-Lolab” was barely visible. As we drove down the narrow winding roads to Chandigam, the main village in the Lolab Valley, we almost missed the Jammu and Kashmir Tourism Department bungalow tucked away on the side of the road surrounded by lush fir forests.  Since there were no other guests besides us (we were told that they received perhaps a couple guests every month), we were treated royally by the employees, some of whom had come to the guesthouse from surrounding areas simply to make our stay more comfortable. Thus began our sojourn in one of the most beautiful, and as yet untouched, valleys in the northwestern part of Kashmir. 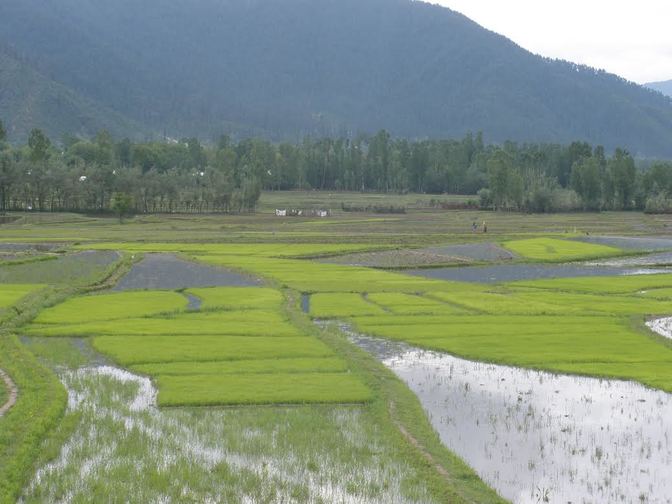 Rice fields in Chandigam
The beauty of Kashmir is legendary and has attracted travelers from all over the world for centuries. The Mughal emperors made their long treks to Kashmir every summer to escape the heat of the plains.  Seventeenth- and eighteenth-century histories from Kashmir are replete with descriptions of Mughal caravans winding their way through the valley, as the emperors and their companions enjoyed its natural beauty while picnicking in its gardens and meadows. Poetic assemblies in which poets from Kashmir, Persia, and Hindustan spontaneously eulogized the beauties of the landscape accompanied these gatherings. The Mughals thus played a significant role in popularizing Kashmir as a tourist destination.

Europeans travelling through Kashmir in the eighteenth and nineteenth centuries were equally taken by its natural landscape, and described, painted and photographed it with much enthusiasm. By the turn of the twentieth century, Kashmir had become the center of a brisk tourist trade, which the princely government of Jammu and Kashmir government attempted to bring under its control. Indeed, the genesis of the houseboats on Dal Lake lay in the need to house Europeans who were streaming into the Valley in such large numbers that there was a widespread concern that they would purchase all the land in the Valley.  In postcolonial India, Jammu and Kashmir remained a popular destination, in this case encouraged by Hindi films, most of which were shot in Kashmir and presented it (despite its profoundly unsettled politics) as a peaceful, spiritual retreat from the increasing modernity of urban life.

Tourism was brought to a halt by the insurgency in the late 80s and since then continues to haunt the tourist industry in Kashmir.  For the Indian press and public in general, tourism is the gauge of the political temperature of Kashmir.  The tourist season this year has been rather weak, in part because of the specter of last year’s floods combined with the waving of Pakistani flags at recent rallies in Srinagar and other towns, which the Indian media has played up. In fact, we were cautioned against visiting Lolab because it is close to the border and is located in a district, Kupwara, which was not so long ago a center of militant activity.

However, in some ways the region felt more stable than urban areas such as Srinagar or Sopore, where political unrest and the presence of the army is far more palpable in the shape of curfews, strikes, and the like. Part of the reason Lolab feels more at peace is because it is very sparsely populated, even by locals, and there are few tourists there. Unlike Gulmarg and Pahalgam, which are extremely popular tourist destinations for the Indian middle classes, and thus bear the heavy imprint of human traffic, Lolab remains virtually untouched.

A valley formed by the river Lahwal, Lolab is defined by its thick fir and pine forests, which despite the consistent denudation over the years, cover a significant portion of the mountainsides. The small lakes and pristine meadows ensconced within the hills and mountains are another striking feature of this valley. The Liddar river of Pahalgam is well-known, but Lolab has countless gushing waterfalls, rivers, and streams that come down the mountains and cut through its forest floors. On our first day, as we walked around the guesthouse and ended up finding our way to the village of Chandigam, we also realized that the area was covered in shimmering rice fields. Since this was mid-May, the seedlings were ready to be transplanted and formed bright emerald-green patches in between flooded fields. As the sun’s rays emerged after several days of rain, they lit up the raindrops that covered the landscape like so many tiny gems.

What was striking about the village, again compared to the cities in Kashmir, was the almost complete absence of motorized traffic. We occasionally saw a bus go by, but most people use horse carts or walk to their destinations.  We were told that they traverse routes through valleys and mountains with ease and can walk as much as 25 kms per day.  Their main occupation is farming and sheep and cattle herding.As we ambled through the village,several children and young women were keen to talk to us in Urdu or English and peppered us with questions about where we were from, what we were doing in Chandigam, where we were staying, and were none too happy when I responded in Kashmiri. 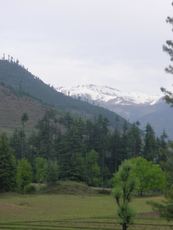 Meadow in Khumriyaal
The next day we drove to Khumriyaal, another village in Lolab, where an almost finished Jammu and Kashmir Tourism bungalow sits atop a mountain to which there is no accessible road. We had to climb a dirt path up the mountain to reach this bungalow, from where we watched as the sun set over the snow-covered Himalayas in the distance. There are several such unfinished tourist bungalows in this and neighboring valleys; apparently, the previous government began construction of these guesthouses to expand the tourist trade but stopped short of completion as funds ran out.  From the bungalow, as we trekked through thick forests into vast open meadows surrounded by snow-capped peaks, we realized what Kashmir must have looked like to travellers centuries ago. Occasionally we came upon a makeshift hut built by Gujjars in a forest clearing with a plume of smoke rising from it, a small field of corn around it, and sheep and cows grazing nearby.
The day after, we visited the village of Kalaroos, a place well-known in Kashmir’s oral and textual traditions for the eponymous cave located high-up on the mountains surrounding the village. According to these traditions, the cave Kalaroos leads to a natural tunnel through the mountains that winds its way to Russia. A hapless Englishman is said to have attempted this crossing but was not heard from again.  We decided not to go much beyond the entrance to this copper-rich cave.  On the way to the cave is another stunning natural formation known as Satbern to locals.  It is a large volcanic rock with seven arched nichescarved into it that sits on the mountainside with a stream gushing by. As we marveled at its rugged splendor, it was easy to imagine Buddhist monks and Rishis (local saints)meditating peacefully within its arches.This geologically-rich area is dotted with many such massive rocks eroded into various shapes by the mighty glaciers and rivers moving across the region.

We did a lot of walking, hiking, and trekking in Lolab, simply because many of the roads are not fit for wheeled traffic, and cars cannot go up on mountainsides.That brought us much closer to the landscape and also the people who live there. The valley is so pristine that we did not want to leave, and yet at the same time felt that we had overstayed our welcome.  Although the locals want their valley to become a tourist destination, the thought of it becoming a trampling ground for thousands of people is heart-wrenching. If it is done, then the opening up of the Lolab Valley to tourism needs to be carefully managed.
Chitralekha Zutshi, first posted June 2015