In an occasional series for KashmirConnected, the eminent historian of Kashmir Chitralekha Zutshi writes about her experiences across the Valley and the manner in which the past moulds Kashmir's present
The JNU protest and its stunning aftermath—in which students were arrested on charges of sedition, journalists beaten up, and several television channels used doctored tapes to whip up nationalist frenzy—has led to a deep self-reflection regarding the state of the current government in India, and its, as well as the media’s, blatant disregard for truth in dealing with these events. Unfortunately, not much has been said about the original reason for the demonstrations on the JNU campus that fateful day, which were held to mark the anniversary of Afzal Guru’s judicial hanging by the Indian government in 2013, and to protest that event, and along with it, to demonstrate solidarity with Kashmiris’ right to self-determination.

What drew the most ire from Indian nationalists of various stripes was that the students had been audacious enough to shout the dreaded word aazadi (freedom) for Kashmir. Amidst the din of protests against the government’s heavy-handed response towards the JNU students, however, Kashmir, and demands for its aazadi, have once again been sidelined. 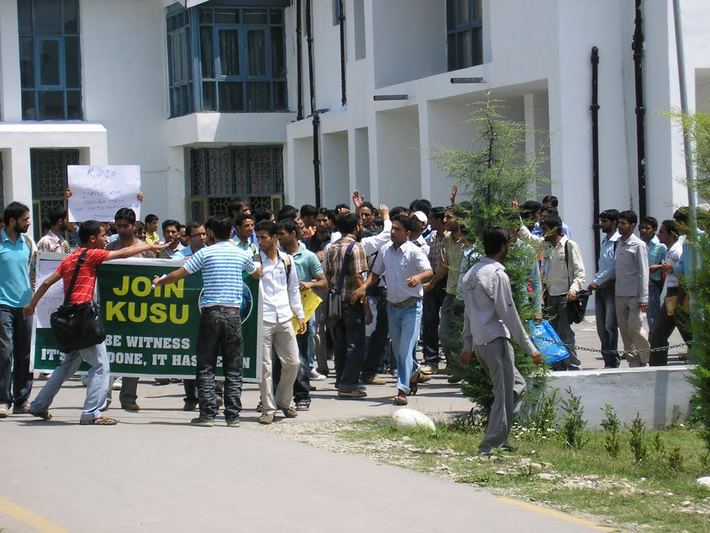 Kashmir University Students' Union demonstration
Leaving aside political aazadi for a moment, it is a fact that Kashmiris have very little aazadi—they certainly do not have the freedom of assembly or protest, unless they are willing (and many are) to be faced with tear gas shelling, or even a hail of army bullets. For the most part since 1947, they have not had the freedom to choose their own governments.These freedoms have been systematically denied them by all Indian governments, regardless of the political party that has been in power at the center.  It is useful to remember, for instance, that it was a Congress government led by Jawaharlal Nehru that gave its imprimatur to the removal of Kashmir’s then Prime Minister, Sheikh Mohammad Abdullah, from power in 1953, and that the sentence against Afzal Guru was carried out under a Congress-led government.(Although these comments concern the Indian state of Jammu and Kashmi, it is worth noting that the denizens of the other side of Kashmir, despite living in "Azad" Kashmir, do not have very much aazadi either.)

Demands for political aazadi are a natural consequence of a consistent repudiation, in the case of Jammu and Kashmir, of basic forms of freedom that a democratic government is supposed to guarantee to all its citizens.These freedoms are taken for granted by most Indian citizens, and any government attempt at denying them is vociferously disputed, as is apparent from the recent campaigns against the Indian government and the media.  And yet, a denial of similar freedoms to Kashmiris barely gets a nod in the Indian media.

Therefore, as we demonstrate our righteous anger at the government for dealing so harshly with the JNU students, let us not forget the daily indignities and outright dangers faced by Kashmiris in general, and in particular Kashmiri students at institutions of higher learning in Kashmir as well as India.  Kashmiris are eyed with suspicion, and because of their religion and region, looked upon as potentially anti-national elements.  There is no students’ union allowed in Kashmir University; a few years ago, I happened to be on the university campus when a demonstration organized by the Kashmir University Students’ Union was immediately shut down by the state police.  The organization is forced to operate underground.

The cry for aazadi is an old one in Kashmir, and it has held multiple meanings for those deploying it through the decades.For the movement led by the Muslim Conference that began in the early 1930s, aazadi meant freedom from injustice, exploitation, and oppression for Kashmiri Muslims.  As the movement developed into demanding political representation from the Dogra state, aazadi came to mean the freedom to choose one’s own political representatives within the constitutional framework of the state government.

Gradually, the movement demanded aazadi from the Dogra government altogether, calling for it to “Quit Kashmir” in 1946. When Sheikh Abdullah was released from prison in September 1947, he refused to speak out regarding accession until, he said, Kashmiris had acquired responsible government and gained aazadi from the exploitative, irresponsible, and illegal government of the Maharaja under whose autocratic yoke they had been toiling for a century.

I would go further to suggest that Abdullah was not thinking in terms of complete political independence for Kashmir even when he began to speak of aazadi from India in the early 1950s. His calls for aazadi were a negotiating ploy to acquire a more autonomous position for Kashmir within India. After he was deposed, incarcerated, and became the patron of the organization called the Plebiscite Front, its definition of aazadi invoked not freedom from India necessarily, but Kashmiris ’freedom to decide' and to choose whether they would ally with India or Pakistan. It was at this moment that aazadi came to take on the more political meaning of self-determination (khud ikhtiyaari). While this meaning of aazadi as self-determination remains significant when Kashmiris agitate today, the movement for aazadi continues to incorporate the pursuit of good governance, social justice, economic equality, as well as human dignity.

The idea of aazadi has a venerable history in the context of the Indian nationalist and social reform movementsas well; for many nationalists, the word did not simply mean the demand for political independence from the British.  M.K. Gandhi argued early on that Indian nationalism had to embody more than the narrow quest for political aazadi, since real aazadi lay in shedding the shackles of modern civilization and global capitalism that had kept India and Indians enslaved for two hundred years. It was only when Indians embraced this idea that they would become not just independent, but also self-reliant and hence truly free. The political vision of B.R. Ambedkar, a social reformer, did not define aazadi in political terms at all, but rather as a call for freedom from tyranny and economic and social persecution for the lowest castes in Indian society.

Then why has aazadi become a dirty word that connotes sedition in post-independence India? Is the fear of dismemberment so great that India has foreclosed the possibility of ever considering any other plea for aazadi beyond the political one that nationalists made in its name from the British? Surely it is time for the country to move beyond the specter of partition, and consider demands for aazadi based on social, economic, and political grievances.  After all, every Indian could do with a little more aazadi—from poverty, exploitation, violence, and poor governance.

While Indian governments might fall in the face of such demands, the idea of the Indian nation is far more resilient and unlikely to collapse, even when aazadi is a direct demand for self-determination. Let us not allow politicians to hijack the discourse by defining Indian nationalism as loyalty to the Indian state, rather than loyalty to the Indian nation, which has always been flexible enough to withstand challenges and capacious enough to embody multiple imaginings of belonging and freedom.
Chitralekha Zutshi, first posted March 2016

​do read the other episodes in Chitralekha Zutshi's Kashmir Journal