Tucked away on the edge of a forest in a corner of the Lolab Valley lies a makeshift shrine, now in a state of disrepair.  Next to it is an equally ramshackle house on stilts, made of haphazardly nailed together wooden beams, with chicken coops underneath it. The water from a nearby stream, directed to the house, still gushes into a cistern in its compound. The entire area shows signs of recent habitation and abandonment. Upon inquiring, I was told by the locals that a saint had made his abode there until recently, when he was removed by the authorities. Since people had begun to flock to the area to listen to his sermons at the adjoining shrine, especially on Fridays, the army had regarded him as a threat and asked him to vacate the premises.

There are countless shrines, large and small, with numerous stories attached to them strewn across the landscape of the Kashmir Valley.  Indeed, so replete is its landscape with the remnants of holy beings and their peregrinations that it is no surprise that Kashmir has been described as an auspicious landscape and a paradise on earth in a variety of indigenous and other texts, as well as in visual media.  However, shrines have been and continue to be far more than simply spiritual retreats; rather, as the reaction of the authorities to the shrine in the Lolab Valley indicates, they have always been centers of political and intellectual activity.

It was in shrines that Persian narratives in multiple genres were composed, where literature and politics intersected, where partisan battles were/are defined, fought, and then won or lost. Moreover, as the recipients of large tracts of revenue-free lands, sometimes entire villages, for the upkeep of these institutions, the managers of shrines were wealthy and powerful landholders.  These facts, rather than the popular notion that Kashmiris practice a different kind of ‘Sufi’ Islam, explains why shrines continue to be such an important part of Kashmir’s social fabric even today. 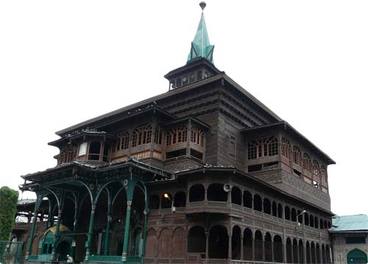 Khanqah-i-Mualla, Srinagar
The shrines of the city of Srinagar have been especially politicized spaces from their very inception.  The most significant of these shrines is Khanqah-i-Mualla, tied as it is in popular memory to Kashmir’s transition to Islam, thus bearing the status of an iconic landmark in the city.  The shrine was originally built in the late fourteenth century to commemorate the Kubrawiya Sufi mystic from Hamadan in Persia, Sayyid Ali Hamadani, who played an important role in spreading the message of Islam amongst Kashmir’s nobility. Persian narratives from Kashmir note that so pleased was Sayyid Ali Hamadani’s son at seeing the completed shrine that he presented Sultan Sikandar, who had patronized the building of the shrine, with a large diamond from Badakhshan as a token of his blessing.
This elegant structure made of cedar wood with sloping pyramidal roofs that rises up from the banks of the river Jhelum in the old city has been altered and rebuilt many times since. Since they are almost entirely wooden, Kashmir’s shrines have been particularly vulnerable to disasters such as fires and floods over the centuries, including the most recent flood last year.  Thus the destruction and rebuilding of this shrine at particular moments has been tied to the descending or ascending political fortunes of several rulers.The intricately carved wooden decorations on the eaves and floral patterns inside the shrine are a fine example of the art of Kashmiri wood carving. There is a deep serenity in the fourteen cloisters that are located within the shrine for prayer and meditation, which belies the battles fought throughout the centuries for control over this shrine and the legitimacy that it endowed to the rulers and their agents who gained influence over its management.

A lesser-known shrine that is worth a visit is Rozabal, located in Khanyaar, downtown Srinagar.  An easy to miss, non-descript, low structure tucked away at a crossroads, this shrine has been a center of controversy for at least a hundred years. According to locals and as the sign outside reads, the shrine is dedicated to the memory of a prophet and prince Hazrat Youza Asif, and also houses the tomb of the Shia mystic Syed Nasiruddin. In the late nineteenth century the Ahmadiyya leader, Mirza Ghulam Ahmad, claimed that this was the tomb of Jesus, who had not died on the cross, but traveled to Kashmir, preached in Srinagar, and died there, whereupon he was buried in Rozabal. Although there is nothing to prove this claim, when one enters the shrine and looks upon the simple tomb covered in green velvet embroidered with Quranic writing, one almost believes that Jesus lies buried in this unremarkable place unbeknownst to the world.

Regardless of whether or not Jesus visited Kashmir after his crucifixion and was buried in Rozabal, this story allowed the Ahmadiyya sect to claim the shrine, and through it find and maintain a political foothold in early twentieth century Kashmir.  In fact, the sect played an important role in early Kashmiri nationalist politics by supporting, financially and otherwise, the movement against misgovernment and for Kashmiri Muslim economic rights led by the Jammu and Kashmir Muslim Conference in the 1930s. 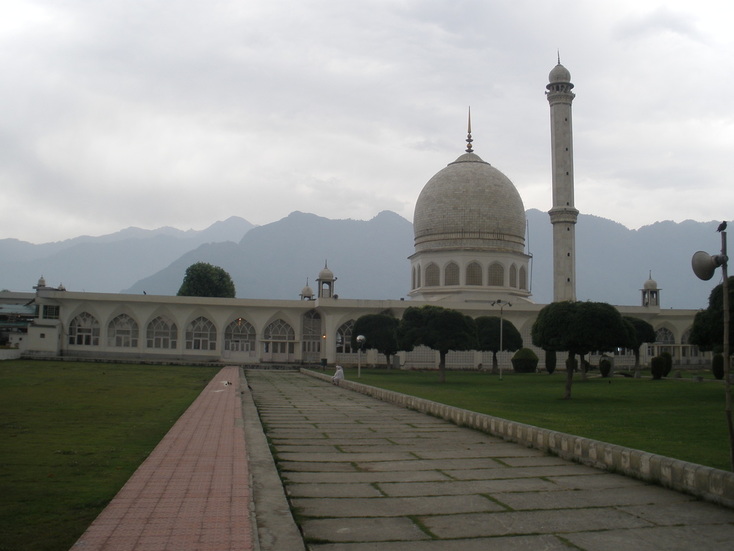 Hazratbal
Another shrine deeply intermeshed with Kashmir’s politics is Hazratbal, on the banks of the Dal Lake, and the home of the most revered relic in Kashmir, the hair of the Prophet Muhammad. The disappearance of this relic in 1963 caused a huge uproar followed by a movement that led to the toppling of the Jammu and Kashmir government. The Hazratbal structure we see today, built in white marble with a dome that is reminiscent of the Prophet’s Mosque in Medina and thus quite unlike the architecture of the other shrines in Kashmir with their pyramidal sloping roofs, was completed in 1979. The construction began in 1968 under the auspices of the Auqaf Trust chaired by Sheikh Muhammad Abdullah, the popular Kashmiri leader who had launched his political career on the site of the earlier, far less magnificent Hazratbal shrine, and was using its rebuilding as a means to re-launch his political fortunes after a gap of several decades.

Like most shrines, life around Hazratbal, especially on holy days, is as interesting as the activities inside.  There is a large, vibrant market that spontaneously emerges every Friday around the shrine with everything from plastic ware, fruits, vegetable, clothes, seeds, books, and ideas on sale.  It was these markets around shrines that served as a conduit between villages and the city for a transfer of ideas, goods and people, as well as a platform for the transmission of stories from oral to textual media and vice versa. Storytellers, readers, writers, and booksellers gathered in these marketplaces as texts being written within shrines and stories being told outside them comingled to produce a space in which everyone could participate.

Is shrine culture under threat in the Kashmir Valley?  It is true that shrines, especially outside the Kashmir Valley, are identified with a syncretistic form of Islam, and Kashmir’s shrines have been targeted by Islamic radicals in recent years.  The most well-known case is the burning down in 1995 of the shrine of the famous Kashmiri Rishi, Sheikh Nooruddin, or Nund Rishi, as he is popularly known, located in Chrar Sharif.  Controversy continues to rage about whether it was a militant group or the Indian army that was involved in the arson.  The changes in the practice of Islam in Kashmir are evident in other ways as well, especially in the increased use of the hijab, even among young girls. But despite this, shrine worship is too embedded within the very sinews of Kashmir’s body politic and popular imagination to be seriously dislodged by radicalization.

Shrines are tied to the everyday rhythms of people’s lives in such intricate ways that even those who speak out against shrine worship have to utilize those very institutions to do so. Shrines are institutions that allowed rulers to assume the position of divine figures and can even today elevate political figures to the level of saints.Thus, the reason that radicalization has not hurt attendance and participation in shrine worship and why it will remain a part of Kashmiri society is because it has never been, in the minds of Kashmiris, about the practice of a different kind of Islam.  Instead, shrine worship encompasses the entire life cycle of the individual, and shrines are spaces where the spiritual, political, and social seamlessly intersect.