I spent May and June in Kashmir a few years ago, as I often do, for research. They were especially rainy months, and bitterly cold.  It rained incessantly for a week in May and there were reports of flooding and destruction of crops from various parts of the Valley. This was the time when I spent every day from morning to evening reading Kashmir’s histories, attempting to make sense of the stories they related, especially the stories of the origin of the land and its people. I was especially taken by the story of Kashmir’s origin from water, from the divine lake Satisar, but its real meaning did not sink in until that period of incessant rains.

During a rare moment of lull in the rains, I made my way up the Zabarwan mountain to the Shankracharya temple. Upon reaching the top, I looked around at the stunning view of the snow-clad mountains surrounding a valley almost submerged in water.  Only then did I truly understand the power of water in shaping Kashmir’s landscape, and the people’s very sense of themselves and their land.  Water’s ability to retreat to give birth to land and just as easily to flood and reclaim it was stretched out before me as far as the eye could see, and explained the near-obsession in Kashmir’s histories with water as a symbol of birth, death, and purification. 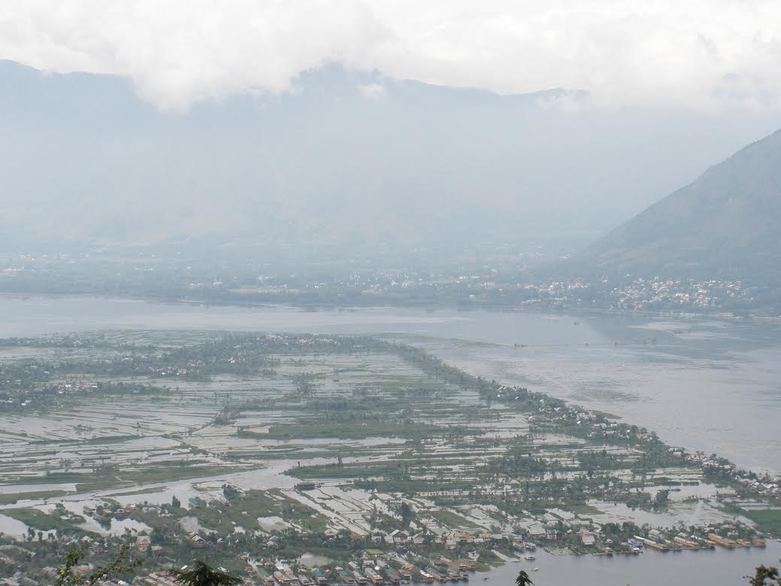 Flooded Srinagar from Shankracharya hill / Takht-i-Suleiman
In these histories, Prophet Solomon’s flying throne landed on top of the Shankracharya hill (thus giving it the name Takht-i-Suleiman or Koh-i-Suleiman), from where he took in a scene not unlike the one I had observed.  On seeing that this beautiful land was not fit for habitation, he deputed his trusted lieutenants, the jinns Kashaf and Mir, to drain the water so that the land could be made inhabitable.  When the land emerged, it was named Kashmir after the two jinns.  This story joined a series of stories in Kashmir’s histories about other holy figures, such as sage Kashyap, making their way through Kashmir to discover that it was submerged under water,and their attempts, usually involving divine intervention, at draining the water to transform Kashmir into a sacred space where human beings and divine figures could co-exist.

Kashmiris have a deep reverence for nature, water in particular, because they almost instincively understand its power.  The chashmas (springs) of Kashmir, which are literally points from where one can cross-over from the earthly to the other-worldly paradise, are anthropomorphized as spirits in both textual and oral narratives. I was told by an older woman who lived close to a chashma that during spring-time, she kept the doors to her home open to welcome the chashma’s spirit into her home when it rained.  Shutting the doors on it would incur its wrath and cause the rains to become heavier and the chashma to flood.

At the time of the relentless rains that year, I heard stories doing the rounds, on buses, in libraries, and on the streets, that linked the inclement weather to the birth of an abomination (a ten-headed baby, a jinn) in a local hospital.  These and other such stories about the power of watercan be dismissed as mere superstition, but are in fact potent reminders of people’s relationship with the natural world and their attempts to explain and control it.

I was in Delhi at the time of the sudden, heavy rainfall in Kashmir and the massive flooding that it brought in its wake a year ago.  Decades of untrammeled greed and misgovernance, which led to unchecked encroachments into wetlands and low-lying areas as well as faulty drainage systems, left the water no recourse. It was stunning how quickly it regained control over the lands that had been claimed from it not so long ago and converted them into mighty, gushing rivers that levelled everything in their path, with no regard for high or low, rich or poor. As the Kashmiri poet Ghani (d. 1669) wrote, “Love equates to the ground both the king and the slave / The flood levels off both the mounts and the dales of the road.”  Kashmir, it seemed, was reverting to its original state.
When I visited Kashmir a month after the flood, I could not believe the scale of the devastation—it looked as though the city, especially its newer localities, had been bombed. Houses, including several large mansions, were hollowed out shells of their former magnificent selves in many areas of the city of Srinagar. Hundreds of people had lost all their belongings, their businesses, and been rendered homeless.  The roads in several areas had been reduced to rubble and cars lay marooned amongst their debris.  The priceless historical treasures in the Jammu and Kashmir Cultural Academy, other libraries, and in people’s homes were now a part of the flotsam and jetsam of the flood.  I listened to friends’ harrowing stories of fleeing up the stairs of their houses with the water lapping at their heels and then being stranded for days on end in their attics or the highest floors, thirsty and hungry, waiting for the water to recede, or to be rescued.

It looked at that time like recovery would be a long and hard process. And several months later, when I visited again in May 2015, the recovery looked patchy at best. Many houses in the city still lay abandoned while some roads were in the process of being rebuilt, causing the air in those areas to be choked with dust.  As I traveled outside the city for the first time since the flood, I could see the extent of the damage that it had caused in the countryside.  In Kulgam and Anantnag districts, vast stretches of fields lay barren, made uncultivable by the water under which they had remained submerged for months.The roads leading to these districts were filled with large craters that made the movement of traffic almost impossible.

I was told by a village headman in Kulgam district that an over two-decades-long insurgency had not brought about the scale of destruction that the floods had wreaked in a matter of hours. The government, as usual, seemed absent.  People had received little recompense, beyond perhaps a mere Rs. 3500 to some homeowners in the city, which also many did not receive because they happened to be out of town when it was distributed.  And yet they were trying to rebuild, pooling their resources and helping their neighbors with whatever little they could spare.

In Kashmir’s historical narratives and oral tales, the physical/natural and political pasts of Kashmir are inextricably intertwined.  They often present such catastrophic natural events (of which there are many in the history of Kashmir) either as the result of poor governance—the policies of a particularly bad ruler—or an augury for a major political shift—a change in dynasty, for instance.  One can say that the case of the floods of 2014 was both a result of poor governance and an augury for political change, although the extent to which the change in dynasty will bring about a real transformation in political and economic practices that led to a situation such as the floods and their aftermath is debatable.
Chitralekha Zutshi, first posted September 2015
Explore other entries in Chitralekha Zutshi's Kashmir Journal here