As Americans prepare to come together with family and friends around turkey and a variety of dishes this week for Thanksgiving, I am reminded of the centrality of food to Kashmiri social life.  Any event, from a minor one such as receiving a guest in one’s home, to a major one such a circumcision or a wedding, becomes a celebration of not just the occasion itself, but of preparing, laying out, serving, and consuming together the most delicious victuals.

​Over the many years that I have conducted research across Kashmir—through conflict, curfews, natural disasters, and much else—I have never once gone hungry.  I have eaten at small, medium, and giant dastarkhaans (the cloth spread on the floor on which the meal is served)at many a home all over Kashmir.  However humble or lofty the fare on it, the dastarkhaan has always been the center of warm hospitality and conviviality that has bound me, however fleetingly, with the people and the place that I write about. 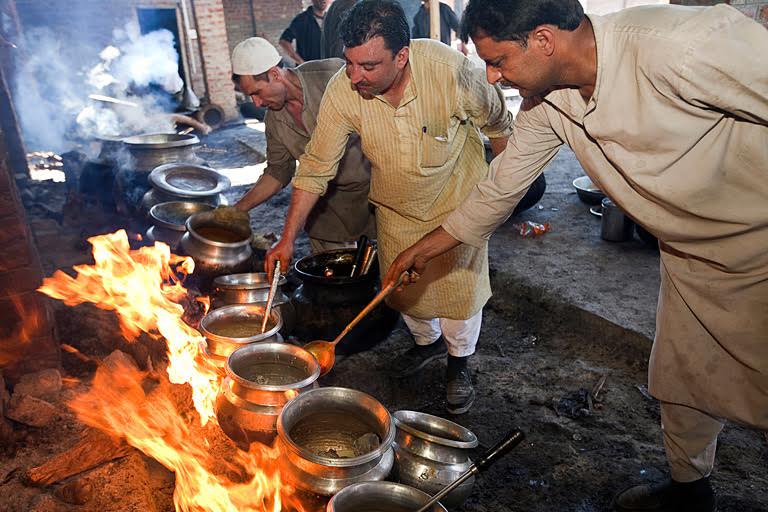 Wazas preparing the meal
Scarcity of food is fairly well-known in Kashmir, especially during the harsh winters, which is possibly one reason why food holds such an honored place in Kashmiri culture. Even today, women of the family busy themselves in September and October in drying vegetables and preserving fruits for the season ahead.  While summer cooking consists of a variety of dishes prepared with fresh, green, leafy vegetables that grow in abundance in the fecund soil of Kashmir—either cooked separately or in combination with a variety of meats such as lamb, duck, chicken, or fish—winter brings with it the smoky flavors and textures of dried turnips, aubergines (eggplants), and zucchini, sometimes along with dried fish or black beans in a medley of preparations, as well as the sweet and sour taste of dried apples, plums, and apricots.

Since the beginning of the insurgency and the resultant violence and bloodshed, food has come to hold even greater meaning as each meal signifies a celebration of life itself. While conducting research in Kashmir as the height of the insurgency in the late 1990s, I marveled at the ability of Kashmiris to continue to mark occasions such as birthdays, circumcisions, and weddings with much fanfare and around large meals, often with the sound of gunfire in the background.  Then I realized that the famous Kashmiri wazwan (Kashmiri feast), with as many as thirty courses, mostly meat dishes, was not just about eating or even the occasion, but a critical means of keeping a sense of community intact in the face of immense odds.

Starting the night before and through the day of the feast, wazas (cooks) began preparations, slaughtering lambs, beating the meat into fineness for a variety of soft Kashmiri meatballs that are served as part of the feast, combining spices, stoking the fires, and finally cooking the food.  As people gathered around tramis (large copper platter that serves four) with a heap of steaming rice at the center and meat dishes served piping hot around it over the course of a couple of hours, they momentarily submerged their fears and sorrows in the act of savoring a good meal surrounded by relatives and friends.  (It is worth mentioning here that wazas, whose shops are located in particular areas of the city of Srinagar, form a significant political group in Kashmir and have influenced the direction of politics at key historical moments.)
​
For instance, it is only in Kashmir that the stem of the lotus flower—abundant in the lakes and other water bodies of Kashmir—is eaten in a variety of preparations; another Kashmiri specialty is kohlrabi and its leaves, also prepared in multiple ways along with fish, meat, and beans; yet more specialties include the flowers and tender leaves of the pumpkin plant, as well as black mushrooms, found in the mountains surrounding the Valley.  Rice is the staple grain, with lamb meat in the Valley and higher elevations and goat meat in lower elevations, as well as freshwater fish from the rivers and lakes being consumed in large quantities.

Since I grew up outside Kashmir in the Indian plains, what made me identify as being a Kashmiri (and how others identified us), besides the language that we spoke to each other, was the food that we ate. My mother, a fabulous and innovative cook who learned the art of cooking from her own mother, prepared Kashmiri specialties for us on a daily basis,and my school lunchbox was often filled with yummy delicacies such as crispy-fried lotus stem or Kashmiri meatballs that my classmates from other parts of India found unrecognizable and tried very gingerly.  She grew (and still does) the leafy vegetables of her homeland, such as haakh and sochal, in our backyard, where they surprisingly flourished despite the heat of the plains and were harvested to be lovingly prepared into red (chillies), yellow (turmeric), or white (yoghurt) dishes.

Roganjosh (goat meat in chillies),yakhni (goat meat or chicken in yoghurt), macch (Kashmiri meatballs), dum aaloo (whole spicy potatoes), and many other Kashmiri delicacies were a staple in our household,while other dishes such as dried Kashmiri fish (not to everyone’s taste), was cooked on rarer occasions to be relished by my mother, grandmother, and I. Preparations of yellow rice (tehar) and goat liver (charvan) were served on birthdays and also distributed to neighbors.  Steaming cups of Kehwa, or spicy Kashmiri tea, flavored with cardamom, cinnamon, and chock-full of almonds, warmed us on cold winter afternoons.  It is through the distinctive flavors and ingredients of Kashmiri food that my sister and I glimpsed, and came to share,my parents’ and grandparents’ lives and pasts in Kashmir.

Not unlike Kashmir’s natural beauty and fine products, Kashmir’s cuisine too is celebrated as special.  Wazwan has now become a byword for refined Kashmiri cuisine to be consumed by the urban elites of India and Pakistan.  Many high-end hotels and restaurants in Delhi, for instance, serve this Kashmiri feast to their guests as a gourmet experience.  Kashmiri cuisine, however, is much more than the 30-plus course wazwan; it is the experience of enjoying Kashmiri food cooked in a Kashmiri kitchen with a Kashmiri family, within or outside Kashmir. It is the act not just of consuming the food, but also of sharing in the traditions, flavors, and memories that go into the making of this delectable cuisine.
Chitralekha Zutshi, first posted November 2015
do read the other episodes in Chitralekha Zutshi's Kashmir Journal