I rarely write about women, whether Kashmiri or otherwise. Perhaps I should, but I do realize that without the everyday acts of kindness and courage of many a Kashmiri woman, past and present, I would not be able to do what I do. In my experience, the reason that Kashmiri society continues to function and why a sense of community continues to hold it together despite the ravages of decades of insurgency and natural calamities, is because of women’s small, daily acts of heroism.  This might not be unique to Kashmir, but it’s certainly exemplified in large measure by Kashmiri women’s valor in the face of immense odds.

I remember the day I landed at the Srinagar airport almost two decades ago to begin preliminary research on what would become my dissertation. The city was shrouded in smoke as the insurgency and the military crackdown against it raged all around. On the way from the airport, I could not believe that I was still in India — we were surrounded by military bunkers that blocked roads as soldiers glared from behind hills of sandbags or from the backs of army trucks at the passengers of the few cars still on the roads. Having grown up in more quiescent parts of India hearing stories about the beautiful Valley of Kashmir which I had last visited as a child, I did not quite know what to make of all this. I had not known what to expect, but it was certainly not that level of disquiet.

As we made our way through the nearly  empty streets of Srinagar to my parents’ friends’ house, where I would be spending the next ten days, I was told that their house had been raided the night before and as a result it was not safe for me to stay there. I should, said uncle, fly back to Delhi the next day.  I listened uncomprehendingly, not just because I could not understand what he meant when he said that their house had been raided, but also because I could see my project disintegrating before my very eyes even before it had started.

And there, in fact, it would have ended had it not been for aunty’s timely intervention. An intrepid woman who had negotiated both with militants and the army to keep her home and its denizens safe, she told her husband that I would not return until I had completed the work I had come to Srinagar to do. For the next ten days, she facilitated my travel to the archives, the university, and to people’s homes so that I could get some sense of the sources available for my research.  She even organized a picnic to Gulmarg, where we all spent a wonderful day not thinking about the burning city we had left behind as we reminisced about the Kashmir of yesteryear. 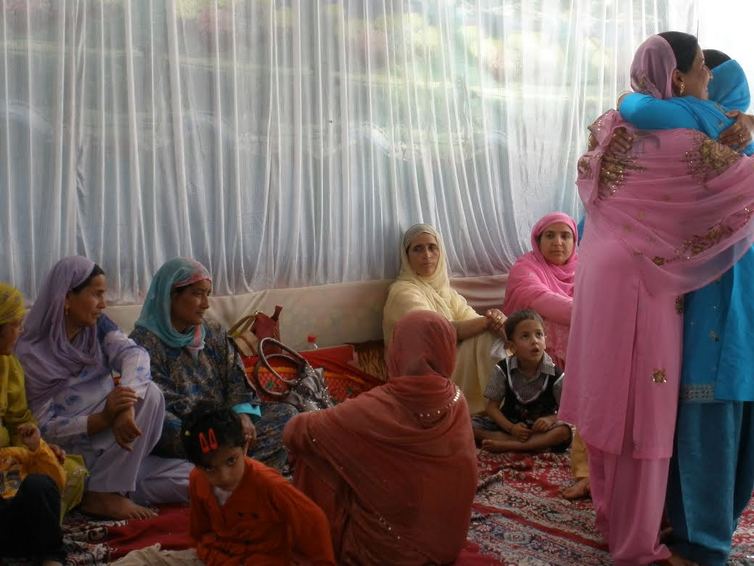 A wedding reception
I spent most of the next year in Kashmir conducting research while living in the same house, which was now empty since uncle and aunty were out of the country.  It was a lonely, difficult year, and I struggled, along with other Kashmiris, to make it through each day.  Every evening, as darkness descended and a curfew shuttered everyone indoors, the neighbors’ daughter-in-law, who was about my age, stole in through a gap in the hedge to ask about my day. We traded stories over tea and biscuits by candlelight (power cuts were endemic) — she telling me about being a newly-wed Kashmiri woman as I in turn related to her the intricacies of being a graduate student in America.  Sometimes she helped me decipher Urdu documents that I had collected during the day, and at other times she came bearing a portion of what she had cooked that day for my dinner. The one dish I remember most is a delicious preparation of wild duck and turnips. After a couple of weeks, my days became bookended by her good morning yell across the hedges as she arose in the morning and her goodnight yell before she went to bed.

When I visit her now, still in the same house, we reminisce about those dark evenings through which we helped each other survive.  On my most recent visit, she laughed as she related the horrors of last year’s flood and how the family had lost almost everything, including their belongings and business as a result. The extended family was living on the top floor of their house, crowded in one room, but they were rebuilding and would soon be moving back into the rooms on the lower floors. My friend remains undaunted, even after years of living through conflict and now a natural disaster.

In my own family, I have heard stories of my paternal great-grandmother, who was widowed at a young age, but managed to single-handedly raise not only her two daughters, but also adopted her grandson, after her older daughter passed away at a young age as well.  And she did this on extremely meagre means.  Her fighting spirit is still remembered by people in her old neighborhood in Srinagar, who describe her as a fierce woman not to be taken lightly and certainly not to be crossed.  My grandmother, not that better off than her mother, raised eight children on a paltry wage, and though unlettered herself, instilled in them a zeal for education that allowed them to become successful professionals.

In rural areas, Kashmiri women held households together when their menfolk left for the Punjab and elsewhere in India to labor or sell their goods.These women tended to the fields and orchards, took care of livestock, and spun yarn to make cotton and woolen garments to keep their families nourished and clothed in often terribly harsh weather.They also participated in a vibrant narrative tradition by inviting into their homes, feeding, and thus patronizing a variety of wandering mystics, storytellers, and minstrels, whose tales they later recounted to their extended families on cold wintry nights.

These urban and rural women are the forerunners of women in contemporary Kashmir, who are heading households in the absence of men that have either been killed or have effectively disappeared into the mists of conflict for one or more reasons. There are more Kashmiri women gaining an education and acquiring jobs today than ever before; some are even postponing marriage as a result.  And this despite the increasingly conservative turn in Kashmir’s politics that targets women and expects them to conform to strict “Islamic” traditions.  In this, Kashmir is no different than other nationalist movements—including the Indian nationalist movement—which often convert women into symbols of resistance and upholders of a pure tradition.

This turn has created yet more hurdles in women’s already difficult lives rent asunder by years of uncertainty.  But despite these circumstances, Kashmiri women continue to go to schools, colleges, universities, and workplaces, now in fully-covered burqas or with their heads covered in hijabs. Among the women I spoke to about this change, some certainly see the adoption of the hijab or the burqa as an act of defiance against India, but for most it is simply a means to gain an education safely and get that job that will provide for themselves and their families.

Aunty, my friend, my great grandmother, my grandmother, or those countless Kashmiri women who soldiered on and continue to do so in Kashmir will not make it into the pages of history.  They are, however, the ones who actually create it, and allow those of us who have the luxury to narrate it, to do so.
Chitralekha Zutshi, first posted August 2015